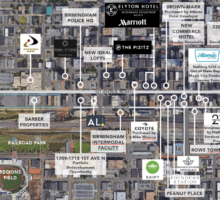 First Avenue North – a street that has enormous significance in Birmingham’s past – is poised to play a large role in the Magic City’s future.

The street, which carries U.S. 11 through the city, has long been a main thoroughfare dating back to the city’s founding in 1871.

But the street’s future may be even brighter than its past, as a BBJ evaluation of real estate activity along the corridor shows that there has been some form of real estate project or transaction on nearly every block of First Avenue North between the Red Mountain Expressway and Interstate 65 in the past five years.

Experts say this activity means First Avenue North, as well as adjacent Morris Avenue to the south, will play a key part in the next evolution of downtown Birmingham.

“We also have the positioning of Innovation Depot on this corridor, which is a great pillar and resource for our entire startup community,” Casey Howard, Vice President at Harbert Realty said. Howard has a couple of listings nearby that are ripe for redevelopment, and she and others have long pointed to buildings across the street from Innovation Depot as holding big potential.

Howard and others say the western blocks of First and Morris still have untapped potential.

“Even with all of these new developments, there’s still opportunity for investors. This area hasn’t peaked yet, so it’s exciting to see all the activity and there are more exciting projects underway that will continue to drive jobs, our economy and quality of life for those of us working and/or living in the city of Birmingham,” Howard said.