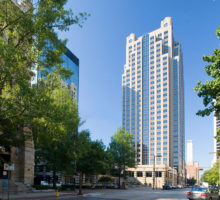 Maynard Cooper & Gale has signed a new lease to keep its offices in Harbert Plaza. Harbert Realty represented the building owner in the transaction.

The law firm will occupy new floors, redesign and renovate its space at the Harbert Plaza, taking up 118,518 square feet over floors 17 through 22. The law firm will maintain roughly the same amount of space at the 1901 6th Ave. N. property, although the space will now be spread across six floors instead of seven.

The transaction is a notable one for Birmingham’s evolving office market and represents a big win for Harbert Plaza and its ownership. The building scored another win when Wells Fargo & Co. announced plans to move its offices from Wells Fargo Tower – soon to be Shipt Tower – to Harbert Plaza, where it will occupy 17,500 square feet.

“Maynard’s lease is an important transaction for the downtown market,” said David Williams, president and chief executive officer of Harbert Realty Services. “The firm’s continued investment in this space affirms that the building continues to be the preeminent Class A office location in Birmingham’s central business district.”

Maynard is working with the law firm design team at Gensler in Washington, D.C., as well as Goodwyn Mills and Cawood. Birmingham-based Brasfield & Gorrie and Trammell Crow are scheduled to begin construction this summer, and Maynard plans to move into its new space in May 2020.